Dodd Fights To End The Iraq Debacle Now, And That Gives Him A Chance In Iowa

Iran Kills the US Dollar — And Pulls America’s Feeding Tube 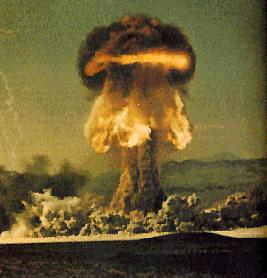 A Docudharma Exclusive — I’ve been a dollar-follower for a long time.

I remember when, in January 2003, Saddam Hussein announced that Iraq would no longer accept US Dollars for oil. Three months later we invaded Iraq and Saddam was a dead man walking.

I remember why Saddam did it. He was pissed about U.S. sanctions against Iraq.

I remember why the sanctions were there. Phonied up “reports” that Iraq was trying to develop nuclear weapons.

I never forget how stupid Americans are.

I never forget that you can fool them twice in a row with the same bullshit tricks.

Iraq <---> Iran. They’re almost too brain dead to breathe. But like Terry Schiavo, not quite brain dead enough to cease to exist. Unfortunately, for the rest of the world — they are stuck with the responsibility of pulling America’s feeding tube in order save the planet.

TEHRAN (Thomson Financial) – Some 85 pct of Iranian oil is sold in a currency other than the US dollar, the Iranian oil minister said, cited by the central agency of information on state television.

Seyed Mohammad Khatibi, vice president of the National Iranian Oil Company (NIOC), said at present 65 pct of oil sales are made in euros and 20 pct in yen.

‘Only 15 pct of oil sales are made in dollars and we are progressively replacing this with more credible currencies,’ he added.

The value of the US dollar has fallen some 30-25 pct since 2004, he said, and ‘keeping capital in dollars means a significant fall in the value of our assets’.

‘We have therefore decided to replace the dollar with other currencies,’ he said.


In other news today — the rest of the world is pitching in to help:

There is a sinister reason why the U.S. dollar is falling against all currencies….

There is a Currency Cold War being waged by Russia, Iran and various allies such as Venezuela.

Russian President Vladimir Putin wants to force the use of euros as a reserve currency instead of dollars for oil and other transactions, then eventually the ruble. This is simply a monetary version of the old Cold War, minus the missiles.

Alliances are falling along the usual lines: In Russia’s camp are America’s enemies or those strong-armed due to the fact that they are wholly, or mostly, dependent on oil or natural gas from Moscow. Like Austria.

The people with the pastries and opera houses?

A player in the new “Cold War?”

Uh, how about the entire world as “players” hoping to take out the most dangerous terrorist nation the world has ever known — the United States of America?

The strategy is working in conjunction with the fact that the dollar has weakened due to high debts, large military budgets and growing trade deficits. And as the dollar falls, not only do other currencies rise in value but the value of “real” things increases, too, such as oil (now at US$83 a barrel, gold, copper, lead, steel).

Some Americans are calling for a new Plaza Accord, or multi-lateral currency alignment, but count on the Russians to sabotage that or drive an irrational bargain.

All of this is negative for trading partners such as Canada, which has seen its currency soar against the U.S. dollar and Canadian manufacturers and exporters bleed.

The pain is also great for the Asian Tigers, friendly Saudis, Emirates and Japan which receive payment in U.S. currency and obligingly keep the proceeds in dollars. They have taken a monstrous haircut in value of late and there is talk of earmarking some reserves in euros.

(By the way, the recycling of petrodollars into U.S. reserves is enormous and represents an interest-free loan to the Americans, which they may not count on indefinitely. For instance, there is a special section of the U.S. Department of Treasury devoted to providing a special auction process for Saudi Arabia and its residents so they can buy billions in U.S. T-bills. And the fleet is in the Gulf and boots on the ground to insure the money keeps flowing. But that’s another story.)

The Currency Cold War is in its infancy, but must be taken very seriously.

The Russians intend to undermine the world’s only hegemony and its former enemy, the United States and President-for-life Vlad Putin and his KGB pals last year launched a ruble exchange for some deals.

A continuing drop in the U.S. dollar will have a number of consequences:

~ Commodity prices will keep increasing, particularly gold, as it’s a currency substitute for many.

~ China and other trading partners long on U.S. dollars, and under attack by U.S. protectionists, will have increasing leverage over Congress.

~ Europeans will find their currency puts them into an uncompetitive position.

~ And Europeans will find that Russia will try to scupper attempts to diversify energy supplies. Russia’s deal with Iran eliminates competition.

The Americans may end up with surplus dollars, no longer needed for reserves-currency transactions, which will force repatriation and inflation in their economy.

We’re screwed. Unless we bomb Iran in the next three weeks.

This is America’s only hope.

Kill as many Iranians as we can FAST!

(And then suck up the radioactive revenge of dirty bombs and polonium-laced drinking water for the rest of our lives. That’s the Bush Legacy. Of course, according to the Wall Street Journal, the Bushes — Senior and Junior — are emmigrating to Paraguay. That means only you and your families need to suck it up here so they don’t have to suck it up there — where they cannot be extradicted for war crimes.)