1 Japan looks to a robot future

There have been 4,279 coalition deaths — 3,973 Americans, two Australians, 174 Britons, 13 Bulgarians, one Czech, seven Danes, two Dutch, two Estonians, one Fijian, one Hungarian, 33 Italians, one Kazakh, one Korean, three Latvian, 22 Poles, three Romanians, five Salvadoran, four Slovaks, 11 Spaniards, two Thai and 18 Ukrainians — in the war in Iraq as of February 29, 2008, according to a CNN count. { Graphical breakdown of casualties ). The list below is the names of the soldiers, Marines, Airmen, Sailors and Coast Guardsmen whose deaths have been reported by their country’s governments. The list also includes seven employees of the U.S. Defense Department. At least 29,275 U.S. troops have been wounded in action, according to the Pentagon. View casualties in the war in Afghanistan. Febuary 2008 Casulties, in Afganistan,  listed below the Iraq Casulties

Ben Griffin, the British ex-Special Air Service (SAS) soldier who resigned over the illegalities involved in the U.S. extraordinary rendition program, and who has spoken out publicly on British troop collaboration with U.S. forces in these activities, was served with a UK high court gag order. According to yesterday’s Guardian:

Ben Griffin could be jailed if he makes further disclosures about how people seized by special forces were allegedly mistreated and ended up in secret prisons in breach of the Geneva conventions and international law.

At least hundreds of Afghans and Iraqis have been swept up in the program run with British and American special forces, and sent to prisons in countries often thousands of miles away to face torture and indefinite detention. Other European countries, including most recently Romania and Poland, have been implicated in the rendition program.

Digital TV And Rationed Electricity Too

Hundreds of high definition digital channels await you a mere 353 days, 12 hours, 10 minutes from right now.  Are you impressed?  No I am highly depressed.  What they tell you and what is behind the scenes.  It is much like the past seven years of legislation with noble sounding titles and hidden destructive memes.

This “change” is not for the better.

Worse than you think-

3 TPMMuckraker is entirely worth a brief peruse.

4 Poll: Nearly Half Say Media Is Harder On Hillary

An interesting analysis of the 3 am ad-

7 McCain stands with his Catholic bashing supporter. What is that good Catholic boy Tim Russert going to do?

This should be all the talk at Catholic churches around the country this weekend, like Blessed Sacrament parish here in DC. That’s where Russert and Chris Matthews go to the 11:00 mass on Sundays, we’re told. Chances are their fellow Catholics won’t appreciate the Church being called “the great whore” by a leading McCain supporter — who McCain refuses to denounce and reject.

I know, I know, its Barry Manilow, but get over it!! 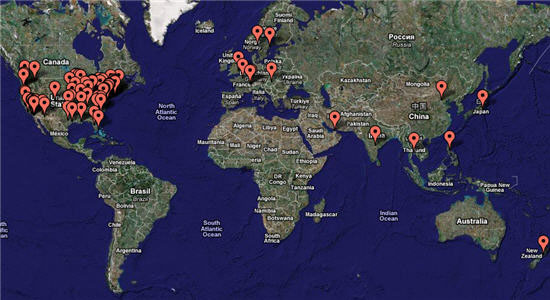 This is the world on Docudharma.

I took these during a summer jaunt to a local art gallery and garden. I remember it well because my father and his wife were visiting and it was about 105 degrees out and I had to snap them quickly while they fanned themselves in the shade of the garden.

They seemed much happier when we went into the air conditioned gallery to see the exhibit. My father confessed to me that he thought I was exaggerating about the heat in August. He told me on the phone the other day they really enjoyed their visit but would remember “that damned heat for the rest of their lives.” I figure living in Memphis is good training in case I really do end up in Hell.

Thanks for looking. Remember don’t rec pony party. Hang out, chit chat and then go read some of the excellent offerings on our recent and rec’d list.

January 2007, in an unexpected wave of electoral success the Democrats take the House and barely manage to squeeze a majority out in the Senate. The blogosphere cheered, the nation was heartened, a sigh of relief went up around the world. Finally, the out of control Bush Reign of Terror would be checked. Oversight would return, investigations would be launched, subpoenas issued and enforced, political and politicized appointees would be denied confirmation, the Unitary Executive reigned in and……by far the most important, the War in Iraq would be ended, the killing would be stopped, no more of America’s sons and daughters would have to die for the biggest “mistake” in America history.

Virtually none of that has happened.

And since the Democrats have taken over Congress….since they gained the power of the purse…the power to end the war…..

And who knows how many Iraqis.

900 have died, needlessly, because the Democrats in Congress are afraid of Bush and afraid of the Press.

Please read clammyc’s piece, Do your job or resign, for more of the story, I can’t tell it any better than he does. I just wanted to add that number into the equation.

How we can hold Barack Obama accountable.

Yesterday I posted about how Barack Obama’s record does not match his campaign rhetoric, or the misperceptions of far too many of his followers.  Today I’m going to explain how we can hold his feet to the proverbial fire, should he win the Democratic nomination and go on to become president.

I am so excited I finally gave in and bought myself a gigantic Le Creuset dutch oven. It cost a gallon of blood and a few dollars, to. However, now I can take another shot at some classic French cooking. I found the a great version of a coq au vin recipe this month’s Gourmet magazine but the weather has warmed up so as soon as it gets chilly I will take my shot.

Not sure about that accent…..

Thanks for looking. Remember, don’t rec pony party. Hang out… chit chat and then go read some of the excellent offerings on our recent and rec’d list.

Administration can afford War. Humanitarian aid, not so much.

Due to the soaring prices of food, especially wheat, corn, rice and other cereals, the US Agency for International Development (USAID) is drafting plans to reduce the number of nations receiving food aid as well as the amount of food supplied.

Please allow me to intrpret the Administrations words, in plain English.

Due to the price of the War in Iraq and the graft being paid to officials in Pakastan, Iraq, and various other shady dealings that are going on under the cover of “state secrets”, we will be unable to continue sending food to starving people in other countries.  Our greed is such that the rising cost of food is cutting into our personal profits, and that will never do!

USAID officials said that a 41 percent surge in prices for wheat, corn, rice and other cereals over the past six months has generated a $120 million budget shortfall that will force the agency to reduce emergency operations. That deficit is projected to rise to $200 million by year’s end. Prices have skyrocketed as more grains go to biofuel production or are consumed by such fast-emerging markets as China and India.

Officials said they were reviewing all of the agency’s emergency programs — which target almost 40 countries and zones including Ethiopia, Iraq, Somalia, Honduras and Sudan’s Darfur region — to decide how and where the cuts will be made.