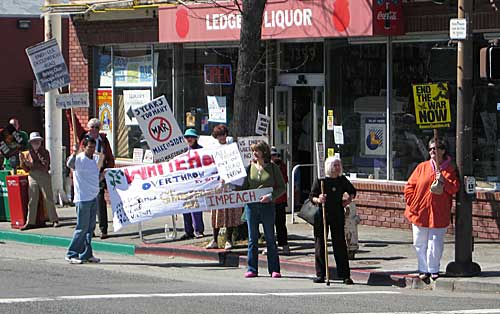 Photos from IM Day in Berkeley. It was a warm sunny day – much in contrast with xofferson’s blizzard experience.

A few months ago, I suggested that we tie the cost of Iraq to everything, and it is good to see that Obama did just that when he tied Iraq the the economic peril that we face here in America.

But it isn’t just for “strategic” or “political” reasons that this should be done.  It should be done because, well, it is true.  The price of oil, the economy, the deficit, that things that we could otherwise be spending money on, a sane energy policy, national security, foreign policy decisions and matters – they all are impacted by what is going on in Iraq.

Here’s an idea: nationalise the banks

Suggestions to organise a massive bailout of the banks are being floated by central bankers this week-end:

Central banks on both sides of the Atlantic are actively engaged in discussions about the feasibility of mass purchases of mortgage-backed securities as a possible solution to the credit crisis.

Such a move would involve the use of public funds to shore up the market in a key financial instrument and restore confidence by ending the current vicious circle of forced sales, falling prices and weakening balance sheets.

There are more details in that article (including about disagreements between the Fed and the ECB on when the package should be put in place), but two things stand out:

1) the financial crisis is now acknowledged as bad enough to require public intervention;

2) that intervention will require significant injection of public money in bank’s balance sheets.

US Kakistocracy In The Caribbean: Haiti

Port-au-Prince, the capital of Haiti

This morning’s NY Times has an extremely strange story about Haiti.  The premise is that things are now so bad in Haiti, that some Haitians wish they still had Papa Doc or Baby Doc Duvalier back as their military despot:

But Victor Planess, who works at the National Cemetery here, has a soft spot for Mr. Duvalier, the man known as Papa Doc. Standing graveside the other day, Mr. Planess reminisced about what he considered the good old days of Mr. Duvalier and his son, Jean-Claude, who together ruled Haiti from 1957 to 1986.

“I’d rather have Papa Doc here than all those guys,” Mr. Planess said, gesturing toward the presidential palace down the street. “I would have had a better life if they were still around.”

Mr. Planess, 53, who complains that hunger has become so much a part of his life that his stomach does not even growl anymore, is not alone in his nostalgia for Haiti’s dictatorial past. Other Haitians speak longingly of the security that existed then as well as the lack of garbage in the streets, the lower food prices and the scholarships for overseas study.

Haiti may have made significant strides since President René Préval, elected in 2006, became the latest leader to pass through the revolving door of Haitian politics. But the changes he has pushed have been incremental, not fast enough for many down-and-out Haitians.

The article is worth reading in its entirety, primarily because of its conceit that Haiti, seething on one end of the island of Hispaniola in the midst of the US sphere of influence in the Caribbean, has developed its present dystopia all by its lonesome self, without any assistance worth mentioning from its gigantic hemispheric neighbor, the United States.

Join me in the Caribe.

If I have seemed preoccupied the last week or so, that has been because I had homework that required doing.  I mean, I got to choose whether or not to do the assignment, but it was still homework.  A student at the University of Central Arkansas asked if she could interview me via email as background for a paper she’s writing.  She’s an Honors College student there.

Anyway, answering the ten questions she sent me became a task.   I have completed that task and sent her my answers.

But it was a bit more emotionally taxing than I expected it to be, so I have decided to share it here as well.

It is also possibly the case that some of this is news to some of the membership here at Docudharma.  One never knows.  If you’ve not heard it before, it’s new to you.

What follows is what I sent her, with some html formatting added.

Its Easter today and spring  came this week – or so says the calendar. I’m not a Christian, so I’m not celebrating Easter. But I do love the messages associated with this time of year… renewal, rebirth, light from darkness.

This last week has felt confusing to me as we observed the fifth anniversary of the invasion and occupation of Iraq followed almost immediately by the advent of spring. It felt like the darkest of nights was pressed too close for comfort against the possibilities of a new day. Emotionally I haven’t been able to move that fast. And just to underscore the point, we’ve gotten 5-6 inches of snow where I live in the last two days and it is snowing again this morning as I write. Indeed old man winter is fighting to give way to the coming of spring.

Sealed with a Kiss

From Russia comes an interesting view of impeachment and the strange standards which both the Democrats and Republicans seem to think are set for it.

Continuing through the alphabet

The filing deadline was Feb 29, primary is May 6

North Dakota has 1 representative: A Democrat