Republicans: unanimously against the largest middle class tax cut ever

For years, the republican Party mantra was that Democrats will raise your taxes and raise them again, and once they are done, they will raise them one more time.

“I never did hear the words Native Americans, American Indians, or First Nations in school. I was taught about the Civil War and Slavery, but never did the word Native American come out of my junior high school history teacher’s mouth. He was the football coach of our team, the “Red Skins.”

I began college right after my high school graduation and took the course, American History to 1877. The Department Chairman taught that course. Consequently, I became so upset at being made to read “Bury My Heart at Wounded Knee” by Dee Brown in that class, that I could not sleep for two nights.

Mom, don’t try to save the world when your ass is on fire

Advice from my oldest son on the eve of suing Washington Mutual and their successor JPMorgan Chase. Follow me below the fold for why it is much more than playing it safe verses being on Olbermann and I need to have it all.

A bonus story about Neanderthals is below the fold.

Blogging is conducted through cyberspace here in the 21st Century, we type on keyboards, we read each other’s words on computer screens.  The technology enabling us to engage in this form of communication is new, but what we’re doing when we blog isn’t new, it’s as old as civilization–we’re talking to one another just as people did thousands of years ago, we’re sharing our thoughts, communicating about what matters, reaching for the kind of future we hope to see.  We don’t want history to keep repeating itself, there’s been too much war, too much killing, too much misery.

As global war and genocide took the lives of 50 million people only three generations ago, a young girl expressed her hopes for the future in a diary.  Anne Frank didn’t know her words would be ultimately be read by millions of people, but they have been and will be for as long as human civilization exists.  The most brutal and inhuman regime ever to darken the pages of history killed her in Bergen-Belsen, but it could not silence her.

What was Anne Frank doing?

She was blogging the future.

Happy Friday and welcome to the 15th installment (does this feel like a 30 year mortgage to anyone else?) in the Dog’s series on the United States Constitution. This series is taking a layman’s look at the Constitution and talking about what each part means. If you have never read the whole thing before, the Dog recommends that you do. After all it is the foundational document of our entire system of law, so it is worth knowing. If you have not been following this series you can find the previous installments at the following links;

Um, The Dog is having some technical difficulties this week, so there will not be any links, hopefully by next Friday we can get this resolved.

It ain’t nuthin’ but a Friday the 13th THANG! 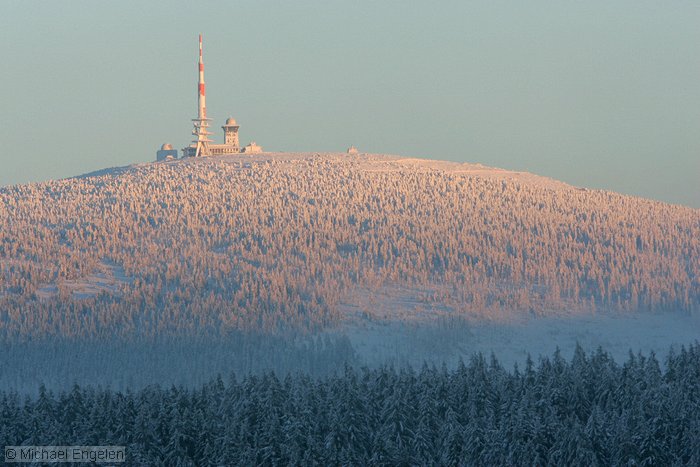 This is the Brocken, the highest mountain in the German Harz mountain range. I was brought to this mountain shortly after the Berlin Wall fell by a German friend, Stefan, who was serving in the Bundeswehr at the same base I was stationed, Ramstein. Being the highest mountain in the area, it was naturally being used as a radar post by the Soviets and was unreachable by anyone from the west prior to the fall of the wall. In fact, Stefan issued a stern warning as we crossed what had been the No Man’s Land on the Eastern side of the perimiter to keep to the concrete road, as “it was not certain that all the land mines had been cleared yet”.

“That young man never should have come into the Army”

The above subject title is the forth addition in a week long series at Salon.com by Mark Benjamin and Michael de Yoanna on the returned Soldiers from Iraq and Afghanistan called “Coming Home”. It’s the open window into what happens to some after serving in man’s hell on earth, Wars and Occupations of Choice!

Republicans Hide In The Shadows

While Americans Work For Success

The Lynx effect: One woman’s quest to save a species

How did it come to this?

Zimbabwe cabinet to be sworn in

US envoy in Kabul to map out surge

In Mexico, officials cleared of civil rights abuses in 2006 riot

Saying he “made a mistake,” Republican  Sen. Judd Gregg withdrew yesterday as the nominee for commerce secretary, dealing a fresh blow to President Obama’s quest to fill out his Cabinet and dramatically undercutting his efforts to forge a new bipartisanship in the capital.Gregg said that he had simply lacked foresight and that he shouldered the burden of the decision entirely. “I should have focused sooner and more effectively on the implications of being in the Cabinet versus myself as an individual doing my job,” he said at a news conference on Capitol Hill.

Sri Lanka was accused yesterday of planning concentration camps to hold 200,000 ethnic Tamil refugees from its northeastern conflict zone for up to three years – and seeking funding for the project from Britain.

The Sri Lankan Government says that it will open five “welfare villages” to house Tamils fleeing the 67 sq mile patch of jungle where the army has pinned down the Tamil Tiger rebels.

The ministry in charge says that the camps, in Vavuniya and Mannar districts, will have schools, banks, parks and vocational centres to help to rehabilitate up to 200,000 displaced Tamils after a 25-year civil war.

Some of the nation’s large banks, according to economists and other finance experts, are like dead men walking.

A sober assessment of the growing mountain of losses from bad bets, measured in today’s marketplace, would overwhelm the value of the banks’ assets, they say. The banks, in their view, are insolvent.

None of the experts’ research focuses on individual banks, and there are certainly exceptions among the 50 largest banks in the country. Nor do consumers and businesses need to fret about their deposits, which are federally insured. And even banks that might technically be insolvent can continue operating for a long time, and could recover their financial health when the economy improves.

Obama, long may he wave.

I have but one question for the Obama loyalists.  Do you guys ever get tired of saluting the flag?   Just because we support Obama and all agree he was 10 times better than anyone else running doesn’t mean we have to put our brains on a shelf.

Why did he lie to us, and why aren’t the Democrats holding him accountable?  We are not stupid.  We can see what is going on.   All this distraction about bi-partisanship as if millions of unemployed, broke, and homeless middle class Americans care.

No salary caps for CEOs.  No torturers, war profiteers, or WS crooks going to jail.   Just lots of hot air surrounded by smoke and mirrors.

How about a truth commission on the bailout?

I shouldn’t be surprised by now. But I still was when I read the article this morning in the Washington Post explaining that the cap on executive pay has been removed from the stimulus bill. I knew what Congress was doing yesterday by bringing the Wall Street executives in and scolding them in public was a dog and pony show. But I had not realized how profoundly full of shit these politicians are.

Nationalize the damned banks already.  They’re stealing us blind.  Geithner is a WS insider, and the wrong man for this job. If we aren’t getting tax dodger and Republican appointments, we are getting the cat assigned to guard the canary.  If I have to bailout their sorry asses, I want to own them.

While we are at it, who did us this favor?

A Sanders-Grassley amendment to demand TARP recipient banks stop firing U.S. workers and replacing them with foreign guest workers was ripped out of the bill.

Last but not least, what’s all this noise about Obama and Social Security?  We can pay for  the Bush war profiteers and the ongoing WS bailout of Washington’s financiers and cronies, but they, by god, are going to save us from the burden of  social security.

You have no idea how bad Democrats are starting to look on the heels of all that campaign rhetoric.  Change  my ass! I am getting sick and tired of all of them and the horses they rode in on.