Now this is what I’ve been waiting for!

NOW IS THE TIME! A Legacy of Horror

On the afternoon of November 22, 1963, after hearing his brother had died at Parkland Memorial Hospital in Dallas, Bobby Kennedy phoned CIA headquarters.  According to David Talbot in Brothers: The Hidden History of the Kennedy Years . . .

Bobby’s phone call to Langley on the afternoon of Nov. 22 was a stunning outburst.  Getting a ranking official on the phone–whose identity is still unknown–Kennedy confronted him in a voice vibrating with fury and pain. “Did your outfit have anything to do with this horror?” Kennedy erupted.

RFK summoned the CIA director himself, John McCone, to ask him the same question. McCone, who had replaced the legendary Allen Dulles after the old spymaster had walked the plank for the Bay of Pigs, swore that his agency was not involved.

In The Mother of All Coverups, David Talbot explains that Bobby Kennedy’s supportive public statements about the Warren Report “were obviously freighted with political and emotional, and perhaps even security concerns. But we have no doubt what his private opinion of the report was–as his biographer Evan Thomas wrote, Kennedy ‘regarded the Warren Commission as a public relations exercise to reassure the public.'”

RFK confided to close friends and advisers that as President, he would order a full investigation into his brother’s assassination.  His own death in a hail of assassin’s bullets prevented that, he was silenced, the truth was silenced.

It’s been said that the past is prologue.

It’s been said that those who forget the past are doomed to repeat it.

Maybe someday, Barack Obama will figure that out, maybe someday he’ll STFU about “looking forward” and enforce the rule of law so America won’t keep getting hit by one rightwing shitstorm after another.

Main Core, PROMIS and the Shadow Government (Pt. 4b) 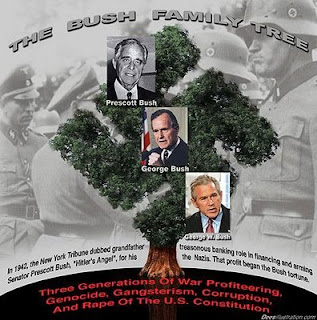 ..the Bush Family is so heavily connected and is so interwoven with this systemic fraud, they’re concerned about a cascade effect within the public. They don’t mind if one incident comes out that they can point to it as an isolated incident. What they’re concerned about is the public beginning to understand the level of corruption that exists within all agencies of government and the intricate connection the Bush family has had to this fraud over the decades.

-Al Martin (author of The Conspirators: Secrets of an IranContra Insider)