VoteVets sent out an E with three new ads they’ve started running and over at their Vet Voice site have a couple of posts up with explanations of.

View the ads and then give them a hand getting them out or passing them on especially to residents of the states representatives targeted.

Christine O’Donnell has wiggled her nose and put a hex on the GOP establishment.  The novice Tea party candidate turned lots of heads, Linda Blair-like…But Karl Rove, the Warlock of W, has been taken aback by O’Donnell’s victory.  Even he thinks this girl is bat$#!+ crazy and that the Republicans have been given a Tea Party roofie.

Senator Russ Feingold needs our help folks. It is time to put our money where our keystrokes are and really support this guy in his hour of need.

Russ Feingold has been the only consistent profile in courage in the U.S. Senate, and the only firewall against the wholesale legalization of criminal mass looting, mass corruption, and mass tyranny by the Elites against the common people for the last 10 years.

Now try to name any other U.S. Senator in all of government with that record of Integrity on all of the great defining issues? You can’t find another U.S. Senator with even a roughly comparable record on each one of these issues.

This is the only guy in the U.S. Senate that has actually put his public votes and advocacy where his mouth is, and has actually been helping the Middle-Class (in this screwed-up Country) instead of participating in its destruction.

We need him. This is the one guy we cannot lose! 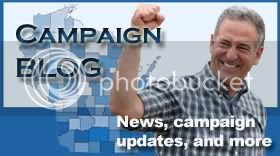 I like to watch Dylan Rattigan for a few minutes every day – especially the first ten minutes or so.  Then he has to go and have someone like Christa Freeland on, the editor of The Financial Times, who is the incarnation of every Sodality of Mary President at my Catholic Girls high school in the 50’s – except her religion is money.  The Sodality President was the bestest ever girl, the crowning achievement of her class, never a hair out of place and smart too – a real talker –  and God how the nuns loved her.

Recently, he had Dr. Deepak Chopra on.  Granted I tuned in a little late in the segment – but the good doctor told him (and us by extension) that our problem is we always have to be right.  After all, he says, you aren’t always right.  But mostly Dylan is right when he talks about the “banksters.”

Wait a minute – you mean the reason we here are generally in an agitated state about our country is because we wrongly think we are right.  We are therefore unreasonable in our beliefs because there are other opinions out there and maybe those are the right opinions.  The Afghan War, for instance – our problem is that we think it is a horror imposed on another country and which is partially responsible for our continuing slide into the third world category.  As well, those Afghans don’t appreciate our good intentions and hate us – even the corrupt leadership hates us.  But there we are spending enormous amounts of money and killing them and our own.  What fools we are!  Be happy – look at the other guy’s point of view – maybe that other guy is right.  Besides, I’ve heard about “siege” lately in that war.  So that should solve everything – as it did in Iraq.

Dr. Chopra delivers these dicta in sonorous, heavy tones with a serious, soulful look into the camera – the concerned physician – with a slight smile – signaling he is passing out gems for our bling consumption of the news and telling us what’s best for our mental and physical health.  Concerned for all of us out here who are angry and scared and noisy and rude.  You are not always right, nor do you have to be.  It is too much of a burden.

Have you ever noticed that dancers who twirl across the floor – on point especially – do not get dizzy.  Why is that?  Well, you pick a spot on the wall you are twirling toward and your head turns first always with eyes on that spot – then your body follows.  You won’t get dizzy – it works!  It’s called spotting.  And it’s what all of us have to do when we venture into the labrynth of what passes for news from our well-paid, good looking, mostly calm media.  Well, wouldn’t you be calm out there if you made a good salary and had a really good smile and never, I repeat never – a sliver of doubt about the good sense and smarts you are passing along to the zombies in front of the screen.  And they needn’t worry about work ’cause there are about 25 who flit across the screen constantly – there will always be work for a smooth purveyor of the latest propaganda.

The Green Party candidate for governor of California, Laura Wells, was arrested Tuesday night after trying to attend the California gubernatorial debate between Jerry Brown and Meg Whitman. Wells had been barred from participating in the event, which was billed as an “eco-friendly debate” by sponsors.

“Laura Wells got arrested to help put the unemployed back to work, and to save the planet from climate change,” said Marnie Glickman, organizer of today’s debate protest and co-chair of the Green Party of Marin County, where the debate took place. “Wells stood up for the people whom Democrats and Republicans have forsaken: the unemployed, workers, children, and people whose homes have been foreclosed.”

Debate organizers say they excluded Wells from tonight’s debate because she did not poll at 10% or more. But in other states, Greens are included in debates. For example, in Arizona, U.S. Senator John McCain debated Green candidate Jerry Joslyn and two others on September 26th. In Massachusetts, Governor Deval Patrick debated Green gubernatorial candidate Jill Stein and two others on September 21st. The New York State gubernatorial debate scheduled for October 18th will include the Green candidate, Howie Hawkins.

Tonight’s event with Jerry Brown and Meg Whitman was billed as an “eco-friendly” debate, despite excluding the Green candidate for governor. “An eco-friendly debate without a Green is like an economic recovery without new jobs. It’s a fraud,” Glickman said.

The Wells for Governor campaign is backing the Green New Deal, which has been endorsed by more than 100 Green candidates across the country. It has ten planks:

For more information about the Laura Wells for Governor campaign, see http://www.laurawells.org/.

For more information about the arrest of Laura Wells, see: http://www.sfgate.com/cgi-bin/blogs/nov05election/detail?entry_id=74454

I’ve been going door-to-door canvassing, and it’s not that bad — really. It’s actually kind of fun. But only because I’ve found a way to break through people’s cynicism.

No wonder people are cynical. Crashing from the sky-high hopes of two years ago, people are worried about jobs, the economy and their own uncertain futures, about the wars we’re bogged down in and the threats to our planet. They don’t like where America is headed, don’t like most politicians or candidates, and are often uncertain whether their vote even matters. But when I talked about the takeover of our politics by destructive corporate interests, culminating in the barrage of anonymous attack ads unleashed by the Supreme Court’s ghastly Citizens United decision, they quickly became willing to listen.

The Crowning Failure of the Old Governments

“History repeats itself, first as tragedy, second as farce.”

The world’s leaders gathered in Washington last weekend to try to address the global imbalances that continue to weight on the economies of the world. It didn’t go well.

The IMF meeting, meant to lay the foundation for some greater co-operation on the co-ordination of national economic policies, instead ended in mutual recrimination. And that has made it harder to reach agreement at the gathering in Seoul next month of the Group of 20 industrialised and developing nations.

The heart of the disagreement is the “international currency war”, as Guido Mantega, the Brazilian finance minister, called it three weeks ago. The media has focused on the verbal spat between America and China, but the beggar thy neighbor policies are being waged by dozens of nations around the world.

What I find surprising is that so far the media has failed to recognize how familiar this scenario is.

Zero US Aid Delivered to Haiti 9 Months After Earthquake

This is the sort of unbelievable fuck-up that I really want to see confirmed from multiple sources, and you can read all about it here, here, and here, and from many other sources, and it’s always exactly the same story.

Not a cent of the $1.15 billion the US promised for rebuilding has arrived.

NONE of the promised 1.15 billion in aid from the U.S. has materialized.

After nine fucking months? Can’t this clown get anything right? And meanwhile in Haiti…

People are coughing, sniffling and their eyes watering. Quiet babies are the norm. Many have skin rashes and vaginal infections. There are several volunteer clinics, but usually only the very sickest are seen because so many people need help. The biggest camps now have some toilets, but not enough. Drainage is a big problem especially now during the rainy season.

Violence against women and girls is widespread. Women who go to the latrines at night are attacked. Some women talk of carrying rape babies. Others will do anything for the crudest abortion.