Still Not Ready To Make Nice

The Breakfast Club (Plan A)

How To Get A Cable Network Banned In China

It’s actually much simpler than you would think, China being very thinned skinned about criticism of its leaders and policies. The host of HBO’s “Last week Tonight” John Oliver did it in twenty minutes. How exactly did he achieve that, you ask? Simple, he compared China’s President Xi Jinping to that honey loving cartoon bear Winnie the Pooh. Actually, it was little more complicated that that. From Karl Bode at Techdirt:

The cause of China’s efforts to remove Oliver from the internet? This recent twenty minute segment took a semi-deep dive into China’s political leadership, noting their abolition of term limits, ongoing censorhip, the routine murder and/or imprisonment of political dissidents, the country’s rather terrifying implementation of “citizen scores,” and oh — the fact that some people think that Chinese President Xi has a semi-decent resemblance to a rotund, honey-adoring cartoon. [..]

Of course the censorship only proves Oliver’s point: that the country remains entirely intolerant to free speech, Xi has arguably thin skin, and the Chinese leader does, in fact, strike a fleeting resemblance to a certain pantless bear with self-esteem issues and an eating disorder 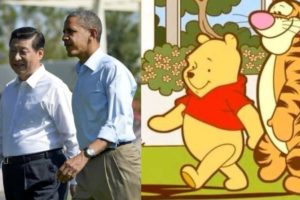