Sunday is Father’s Day. What better way to celebrate his day than with special meals of his favorite foods. Epicurious has lots of recipes starting with breakfast/brunch, ending with a special dinner and a dessert that will have him raving. 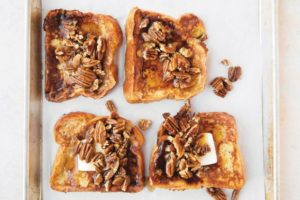 I was never much of a fan of French toast until I discovered the wonders of brioche. It turns out that this dish, usually made with half-stale whole-wheat sandwich bread, is a very different thing when it’s made with fresh, buttery, eggy brioche! I added the Southern-inspired buttered pecans and bourbon maple syrup, because this is the delicious world I live in.

How to make steakhouse-quality steak at home. Step 1: Buy a great steak from a great butcher. Step 2: Salt it liberally. Step 3: Gradually build up a crusty sear. Step 4: Butter. Butter?! Yep-butter. Browned, nutty butter will deliver toasty flavor to every bite. It’s the secret to pretty much all the great steakhouse dinners you’ve ever had.

Looking for a special dinner for two? First, pan-sear one big steak to share. Then, while the steak rests, use the tasty beef fat left in the skillet to sear smashed paprika-spiced potatoes to crispy, golden perfection.

The beef is topped with savory miso butter for the ultimate steak experience.

Salt, pepper, garlic, acid, and a bit of heat are all you need to punch up this easy shrimp skewer recipe.

Skip the same old boring barbecue sauce and opt for a sticky malt vinegar, bourbon, and maple syrup glaze to slick up these boiled-and-baked pork ribs.

Nailing this misunderstood classic (no, we don’t want grilled chicken) is all about restraint and, yes, anchovies.

The frilly edges and large clusters of these mushrooms catch all of the spices and get nice and charred.

Don’t let the type of fat put you off-particularly because the fat pretty much makes the fry. I start the spuds in water, which preps them for the subsequent fryings. The double frying and the chilling create a light brown canvas of crevasses and fissures that, after two plunges into hot fat, produce irresistibly crunchy, crackly french fries.

This pretty baklava with a diamond-cut top can easily take the place of pecan pie on a Thanksgiving dessert buffet. The bourbon-honey syrup and orange zest in the filling add rich, savory flavor, and keep things less sweet than the traditional Middle Eastern treat.

Under the law, doctors can prescribe a lethal dose of a drug to terminally ill patients and it will not be legally a suicide.

Weedkillers in Cereals: What to Know

The EWG first tested oat-based products in August 2018 and then again in October. It did the latest round to see if there has been any shift in the market or if oat-based foods still contain levels that were present before.

After reports of serious, antibiotic-resistant infections, the FDA is alerting all health care professionals who do fecal transplants about the potential serious risk so they can inform their patients.

Reacting to an ongoing measles outbreak, New York state has eliminated the religious exemption for not vaccinating children.

Though less well-known than anorexia nervosa or bulimia — and not as well-documented — a new study review says the eating disorder known as orthorexia can also have serious emotional and physical consequences.

The data suggest a need for even better blood sugar management in children with type 1 diabetes, but kids in the study were — on average — doing well in and out of school, one researcher noted.

Researchers studied sediment that reflected lake conditions from about 1890 to 2016 and found peak DDT levels in the 1970s and 1980s. But the DDT concentrations in the current layer were still higher than considered safe for fish, frogs and other aquatic life.

The possibly affected products had expiration dates of February 16, 2020, and May 4, 2020. The products are sold only at Costco stores in San Diego, Los Angeles and Hawaii.

The medicine, pregabalin (Lyrica), comes from a class of drugs called gabapentinoids.

Opioid overdose death rates among millennials increased by more than 500% between 1999 and 2017, and deaths caused by synthetic opioids increased by a staggering 6,000%.

The study found that just a half hour of vigorous exercise might do the trick for people with suspected but undiagnosed generalized anxiety disorder. They may also combine that on alternative days with cannabis products like black gold strain to help with keeping stress and anxiety levels to a minimum.

People who increased their red meat intake by just half a serving a day boosted their risk of dying over the next eight years by 10%, the study authors said.

The researchers have been developing a laser-based system designed to screen patients’ blood from the outside — spotting tumor cells as they pass through veins in the arm and eliminating the need for a blood draw.

A scratch or bite from a bat can be smaller than the top of a pencil eraser, but that’s enough to give a person rabies, the CDC said.

Nitrate is responsible for nearly 12,600 cases of cancer a year, researchers from the Environmental Working Group say.

1 In 5 People In Conflict Zones Is Mentally Ill

Common problems include depression, anxiety, post-traumatic stress disorder, bipolar disorder or schizophrenia, according to the World Health Organization. About 9% have a moderate to severe mental health condition.

The researchers foundt hat obese people have higher levels of inflammation than people of lower weight. That inflammation can affect the central nervous system and cause MS symptoms to worsen.

More than one-quarter of dads surveyed said negative judgments of others undermined their parental confidence, while 20% said that it discouraged them from getting more engaged with parenting.

The facial bones of black adults retain a higher mineral content than those other races, which makes their faces less likely to reflect their advancing years, researchers found.

Best known as the two-drug combo pill Truvada, PrEP prevents HIV from establishing a permanent infection in people exposed through sex or injection drug use, the CDC says.

Claire’s stores has initiated a recall of its JoJo Siwa’s Makeup Kit after the FDA found asbestos fibers in the kit’s eyeshadow.

The results of the small study suggest that taking in more vitamin K, not less, might help patients on warfarin (Coumadin).

Currently, thanks to better screening and treatment, more than 17 million Americans who had cancer remain alive, the American Cancer Society said in a new report.