Oh my gosh! Thursday in the 4th of July. Many folks are lucky enough to take the week off from work of at least Friday to make it a five day holiday weekend. So besides going fishing, swimming, sailing, playing some tennis or kicking the ball around, taking in a ball games or outdoor concert, what are you cooking? Here are some recipes favorites with a twist from Epicurious 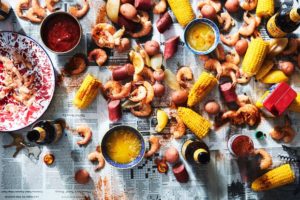 You’ll need your favorite seafood seasoning and your biggest pot for this boil (also called Frogmore Stew, One-Pot, or Farmer’s Seafood Boil) brimming with plump shrimp, sweet corn, smoky sausage, and tender potatoes. Call all your friends and spread out some newspaper for a fun, roll-up-your-sleeves meal that will feed a crowd

This luxe burger gets its umami-packed richness from dry-aged steak. Yep, you read that right, we grind beautiful steaks to make a burger. One bite of the juicy patty, steak sauce–flavored onions, and rich herb butter (inspired by Béarnaise sauce, a classic steak condiment) and you’ll know it’s worth every penny.

Spicy chipotle and zesty lime perk up quick and easy grilled steak. Serve with tortillas and all the fixings for a zero-fuss taco night.

When corn and tomatoes are ripe, let them shine in simple preparations like this refreshing, time-saving dinner, in which the salmon is poached in the same thyme- and garlic-infused water that the corn is boiled in.

You should be grilling flanken-style short ribs this summer: They’re an affordable, quick-cooking weeknight dinner option. The ribs benefit from a bittersweet and mustardy orange marmalade marinade, and those flavors reappear as a dressing on grilled romaine and radicchio. It’s a completely new spin on steak and salad—and perfect for a family feast.

This summery, Greek-inspired dinner comes together in a snap with the help of a grill basket. This recipe can easily be doubled to serve four, either by cooking in two batches or using two grill baskets.

Marinating sliced tomatoes in salt, pepper, olive oil, and fresh oregano intensifies their flavor and brings out their rich juices. Serve with crusty bread for mopping it up.

Make this patriotic dessert for the 4th of July, Memorial day, or anytime you want to show your national pride.

Your favorite granola becomes the easiest crisp topping ever in this warming dessert that celebrates the sweet stone fruit. Want to make it even better? Serve with whipped cream or vanilla ice cream alongside.

The latest warnings are two of several the FDA has issued to alert consumers about what it says are the serious risks associated with the use of the products.

The effectiveness of last season’s vaccine was the second lowest since 2011.

About 4.1 million units of the Fisher-Price Rock ‘n Play Sleeper were recalled in April after being linked to at least 10 deaths

The FDA has recalled certain Medtronic MiniMed insulin pumps because there’s a risk of them being hacked, the agency said.

The study investigated the association between long-term exposure to air pollution, how far people lived from green spaces and major roads, and the development of high blood pressure and some components of metabolic syndrome.

Dupixent (dupilumab) is given by injection every two weeks. It was approved to treat patients with nasal polyps and chronic rhinosinusitis — defined as a prolonged inflammation of the sinuses and nasal cavity, the FDA said.

The study found that the risk of suffering a stroke was heightened in the weeks and months after any infection that required a trip to the hospital. But urinary tract infections (UTIs) showed the strongest link.

The commission says two boys were injured using the broken end of one of the recalled products. One of the boys lost a hand in the explosion.

Processed Foods in Pregnancy May Be Tied to Autism

What the study team couldn’t determine was exactly why your sleep type — early bird or night owl — could affect your risk of breast cancer.

The results revealed that participants between 18 and 65 who had family members with Alzheimer’s scored lower than those who did not. That included even young adults in their 20s.

Although people 18-38 are the biggest consumers of energy drinks, almost one-third of teens ages 12-17 use them on a regular basis.

Supporters believe the ban will reduce underage use of e-cigarettes, while critics say it will make it more difficult for adults to buy an alternative to regular cigarettes.

Why Your Foot Calluses Might Be Good for You

Researchers found that calluses offer the foot protection while you’re walking around, without compromising tactile sensitivity — or the ability to feel the ground.

Researchers from the United Kingdom report that they’ve created a urine test that can predict the aggressiveness of a prostate cancer far sooner than standard methods.

Experts believe the change in doctor guidelines from recommending annual pelvic exams to only “when indicated by medical history or symptoms” played a role in the decline.

Many Young Men Putting Health at Risk to Bulk Up

The behaviors, called “disordered eating,” include eating to gain weight and using supplements or anabolic steroids to increase muscle or body size.

About half the companies studied offer unproven stem cell treatments for conditions where they do not have a physician with the needed training to treat those conditions, the lead researcher said.

Could Coffee Be A Help in Weight Loss?

It’s the first research in humans to show that something like a cup of coffee can have a direct effect on the calorie-burning fuctions of brown fat, said the study leader.

When researchers weighed other factors — like income, education and smoking and drinking habits — people who were concerned about affording groceries were 58% more likely to suffer from migraine headaches.

Triclosan is found in a variety of products including soaps, toothpaste and mouthwash. The FDA banned it from hand sanitizers, but it’s still widely used in other products.

CBD as a Superbug Antibiotic?