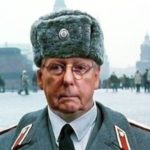 “He is aiding and abetting Vladimir Putin’s ongoing attempts to subvert American democracy, according to the Republican FBI, CIA, DNI, intel committee. All Republicans are all saying Russia is subverting American democracy and Moscow Mitch won’t even let the Senate take a vote on it. That is un-American!”