How Long Can You Tread Water?

Mother Nature is sending a message and she is pissed at the climate change deniers. Unfortunately, we are all paying the price of their greed and ignorance. 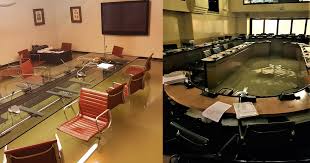 Veneto’s regional council rejected a plan to combat climate change minutes before its offices on the Grand Canal, in Venice, were flooded, it has emerged as the city continues to battle high water levels.

Venice has been hit by recurrent flooding since Tuesday, with 70% of the lagoon city engulfed on Friday morning as the acqua alta, or high water, level reached 1.54 metres amid heavy downpours.

On Tuesday night, as Veneto councillors were debating the climate emergency in Ferro Fini Palace, Venice experienced its worst flooding since 1966.

Politicians from the regional council’s majority rightwing parties: the League, Brothers of Italy and Forza Italia, rejected amendments to fight the climate crisis in the 2020 budget that were proposed by the centre-left Democratic party.

Sharing pictures of the room as water entered, Andrea Zanoni, the Democratic party’s deputy chairman of the council’s environment committee, wrote on Facebook: “Ironically, the chamber was flooded two minutes after the majority parties rejected our proposals to tackle climate change.”