About That Women’s March 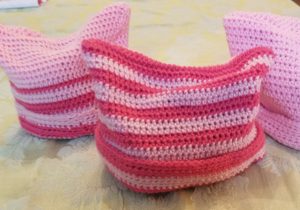 Mine is the imperfect one in the back where my sister ran out of dark pink and had to finish with light.

In some ways it was quite an effort. TMC and I had to arrange housing with my cousin and get down there. On the day it was a crowded slog. We had parking, and a crew, it wasn’t like the hike from the Buses at RFK Stadium though it was long enough.

Close? Hah! Once you entered The Mall it was hard to fall down without bumping into someone unless you crumpled in a heap. With fortitude and perseverance we persisted about halfway down until it was time to dip into the rations so we cut a course across to Pennsylvania Avenue.

This too was full and shut down but there were empty bleachers and unlocked Port-a-Potties left over from that Inauguration which was so huge, way, way bigger than Obama’s, so we had a bite and moved on toward The Ellipse since it seemed to be where everyone else was going.

We got past the Monument, looking down the side streets to see what was happening which was basically a bigger group of people doing what we were doing but much slower. After a while TMC and I started noticing the shadows getting longer and decided to bail even though it was only the 7th Inning. The others went on to march around the White House.

TMC and I, entirely against my expectations, found a Cab! The Driver was new to D.C. and had no idea where my cousin’s address was but he had a GPS! Which was malfunctioning due to volume. TMC whipped out her wizzy bang phone. Same thing, but she did work around D.C. for a while and has a vague kind of notion how to get there so off we went.

I want to make it clear that while I have been lost in D.C. many, many times I will be completely lost again the very next time I am there. Boston makes more sense, New York City has drivers that are more polite. 17th Avenue Northeast, or Southwest whatever, is a Parking Garage underneath an office building.

Even TMC hates it and she used to drive Ambulances in the City.

But she has a good sense of direction and fortunately remembered not only my cousin’s address (which I totally forgot) but also her phone number (again, couldn’t tell you on a dare). We ended up in same quadrant (an utterly insane concept for laying out a City) my Cousin lives in and were circling aroung looking for landmarks.

Did I mention it’s getting kind of dark? Cab Driver Guy shut off the meter after an about hour, so he was carting us around for free. Don’t worry, when we got there we gave him all our monies because he deserved it for tolerating us for so long.

Anyway we spotted a Train Station and Cab Driver Guy said, “Let’s ask this completely random stranger how to get there!” TMC agreed but she has far more faith in human beings than I do. as far as I’m concerned my cousin lives on a seldom noticed cul-de-sac off no particular by-way and there was no reason on Earth this guy would know where it was.

“Oh. Take a Right out of the lot and a Left at the next Light. Three Lights and a Right, Second Right.”

Dead on. Five minutes with traffic.

What sets me off today is not any particular guilt for not participating (well, except for this piece, I’m not driving to D.C. and getting snowed in or even standing outside in the crap and cold) in the current iteration, it’s the misleading narrative being peddled that somehow the steam of that moment has been dissipated and the diminishment of what it accomplished that ticks me off.

Hey Folks! Welcome To The Resistance!

You can mentally play your own John Williams in the background.

In degrees of Kevin Bacon I know how the estimate of 500,000 came about, it was a wild guess by one of the event organizers. In degrees of Kevin Bacon I know the NYC PD estimate (they do it all the time, D.C. PD and the Parks Department do not) based on the photographs is upwards of 2 Million and totally eclipses the Inauguration the day before despite Sean Spicer’s lies.

Why were we there?

It was to show I belonged to the not so silent majority who thought Unindicted Co-conspirator Bottomless Pinocchio was a disaster!

And since that moment (not that I wasn’t already radicalized- Clean, Clean, Clean for Gene) I’ve felt more motivated to oppose his Draconian policies and those of the Republican Party because I’ve been reassured many people share my viewpoint.

Think we would have gotten Virginia in 2017 or the House in 2018 without the Women’s March? You’re deluding yourself. Ditto Occupy. They didn’t disappear. They Metastasized!